The UK MAIL claimed on Sunday that the European Union has banned crown symbols from appearing on pint glasses in Britain under rules introduced in 2004.

The newspaper published a front-page story yesterday that heralded the symbol’s return in time for the start of the UK’s Queen Elizabeth Platinum Jubilee celebrations later this week.

The crown has featured on pint glasses for over 300 years and was used as a mark to show that they were large enough to hold a full pint.

However, the Mail on Sunday alleged that the EU ordered the removal of the crowns in 2004 as part of a directive on measures to demonstrate compliance with EU rules.

Did it really happen? Let’s take a closer look.

The British newspaper Mail on Sunday claimed that the European Union “ordered [the UK] to remove the crown symbol » from pint glasses.

In his May 29 front-page article, he said “the 2004 EU Measuring Instruments Directive required the use of EU-wide ‘CE marking’ to demonstrate compliance with EU rules”.

The story quotes an unnamed UK government source, who said the directive led to “the effective removal of the crown symbol because the UK ‘couldn’t have two competing indications of compliance’.” 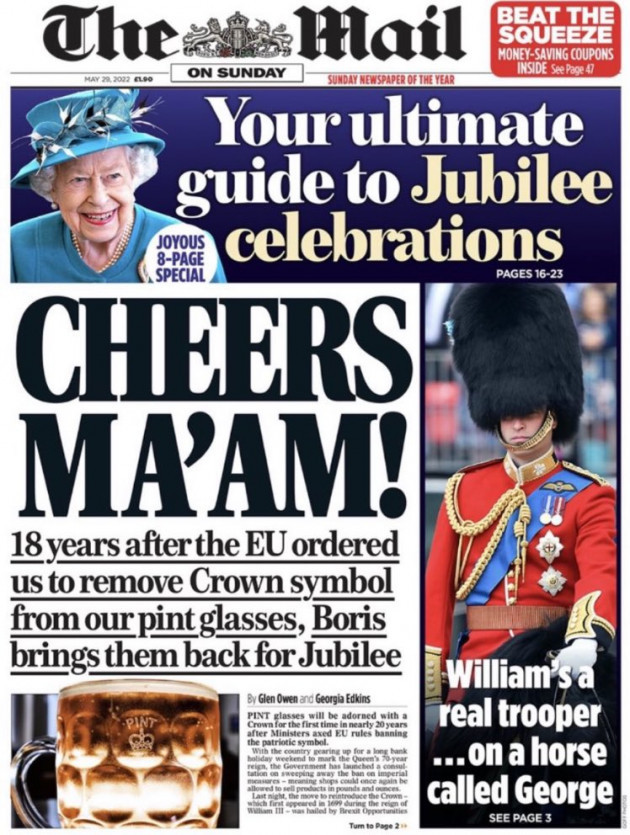 The claim was originally made by senior members of the Conservative Party late last year as the UK pledged to roll back what it perceived to be the stifling bureaucracy imposed by membership to the European Union.

In September last year, former Brexit negotiator David Frost said in a letter to Ian Duncan Smith that the UK government had agreed to allow the printing of the crown stamp on pint glasses” and to review the EU ban on markings and sales in imperial units”. […] neither was possible within the EU”.

Then in December, Prime Minister Boris Johnson pledged to return the crown to pint glasses as part of a list of “key Brexit successes” for 2022.

“From simplifying the EU’s eye-popping customs duties on beer and wine to proudly restoring the crown stamp to the side of pint glasses, we are cutting red tape and bureaucracy in the EU and restoring the common sense in our rules,” he said at the turn of the new year.

First, look at the 2004 Measuring Instruments Directive cited in the article, which is accused of banning the crown from being featured on pint glasses in the UK.

The directive harmonises the standards relating to “measuring instruments” by introducing certain requirements if they are sold or manufactured in the European Union.

The term ‘measuring instruments’ refers to a number of different things in the directive, but one of the specific definitions is ‘a drinking glass’ which is designed to ‘determine a specified volume of liquid […] which is sold for immediate consumption” – which would include a pint of beer.

The directive also specifies a number of rules regarding shapes and markings, but one of the rules also states that instruments must contain the “CE” mark.

The CE stands for “Conformité Européenne” which means “European Conformity” in English. If you bought something in the EU or was made in the EU – a child’s toy or a medical device – you’ve probably spotted this symbol before.

It is essentially a mark indicating that the EU considers the product to comply with agreed standards for health, safety and environmental protection.

So the Mail On Sunday story so far is correct that the 2004 Measuring Instruments Directive led to the introduction of CE marking. 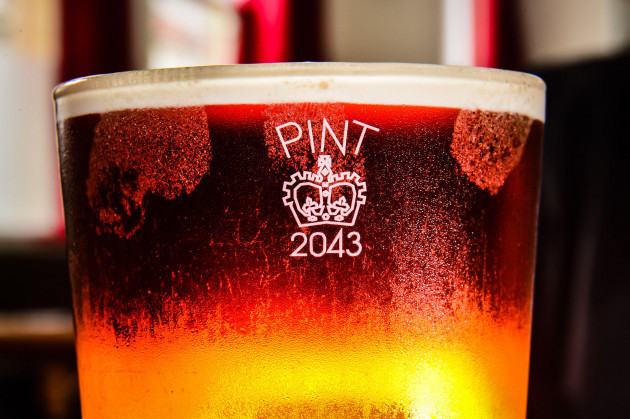 A pint glass engraved with the crown hallmark

But what about the removal of the crown symbol due to a conflict with CE marking?

The directive also contains a series of rules regarding the placement and use of the CE marking on measuring instruments.

For example, it states that the mark must be at least 5 mm high and that manufacturers must affix the CE mark to the products themselves, or show it in the packaging or accompanying documents if a product is too small or too sensitive to wear.

Importantly, the directive states that instruments may contain other markings as long as they do not impact the visibility or readability of the CE marking or mislead people as to its meaning.

A Commission spokesperson ordered The newspaper in Article 7.3 of the Directive, which states:

In other words, crowns were not specifically banned from featuring on pint glasses under EU rules.

They would be banned if they affected the visibility of a CE mark on a beer glass or made people think the CE mark meant something else, but that’s not the same as an outright ban.

The claim that crown symbols have been banned on UK pint glasses by the EU is therefore false.

The allegation is linked to an allegation – as made by David Frost last September – that the EU banned the sale of drinks in Imperial units. However, as anyone who has been to a pub or bought milk in Ireland can attest, this is also false.

Although the EU sought to have the UK and Ireland adopt the metric system by 1 January 1995, the two governments were successful in obtaining a waiver for the use of the unit ‘pint’ when beer and cider service in pubs (and when selling milk in shops).

The European Commission officially ended its attempts to get both states to use the metric system in 2007, when the UK was also allowed to use imperial measurements like miles to measure road distances.

This statement is therefore also false.

The UK’s Mail on Sunday, David Frost and Boris Johnson have all claimed EU rules prohibit a crown symbol from appearing on pint glasses in the UK.

The Mail on Sunday specifically claimed it was linked to the 2004 EU Measuring Instruments Directive, which required the use of CE marking on pint glasses.

The newspaper quoted an unnamed government source as saying the directive meant the UK “could not have two competing indications of conformity”, namely the crown and the CE mark.

However, the directive does not say so. It actually states that multiple symbols are allowed on pint glasses, provided that the second symbol does not affect the visibility or readability of a CE mark or cause the mark to be thought to mean something else.

Accordingly, we assess the claim: FAKE.

According to our verdict guide, this means the claim is incorrect.

TheJournal’s FactCheck is a signatory to the International Fact-Checking Network’s Code of Principles. You can read it here. For more information on how FactCheck works, what verdicts mean, and how you can participate, see our Reader’s Guide here. You can learn more about the team of editors and reporters who work on fact checks here.

by Analytics Insight February 23, 2022 Glasses or contact lenses? In order to choose between glasses and contact lenses, explore some fundamental aspects In the beginning, there were glasses… then came contact lenses. But how can you be 100% sure that between the two options, the one that is really the best for you? Leaning […]

What is happening Facebook parent company Meta no longer plans to release AR glasses in 2024, has scrapped plans to release a smartwatch, and will market its Portal video chat devices as a device for businesses rather than consumers. The company said it still plans to release wearable wristbands and AR glasses. why is it […]